From many years ago as member in 4-H and FHA clubs, my love grew for Home Economics-arts and teaching. As a certified FACS teacher of grades 6-12 in Illinois, I have a passion for all things home, family, and community related! 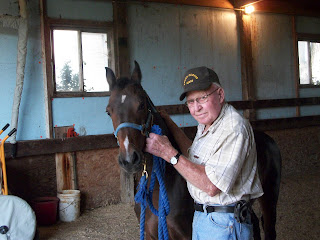 Chuck Porter could write several books on the topic of longevity. At 85 years of age he’s enjoyed a long life. For 75 of those years he’s trained and showed horses.

Porter is part of the third generation to live, love, and work the land his great-grandfather bought in the late 1880s east of . Porter recounted, “My first wife and I were married 32 years until she died of cancer. We have 2 sons and 1 daughter.”

The oldest son is an equine veterinarian and his daughter is a small animal veterinarian who is also known for showing saddle horses. “My youngest son is a mechanic. He’s involved in a different kind of horsepower,” joked Porter.

“My second wife and I have been married now for 27 years. She [Alzina] has 5 children from her first marriage that also had ended from cancer,” reflected Chuck.

Chuck continued, “Our children and grandchildren have all pitched in and helped around here.” Alzina, however, understated her contributions. “I just accompany. I pack our bags…do a little go-fering,” she admitted.

Alzina’s granddaughter Emily (well-known for pole vaulting) is also working and showing horses for her grandpa. “She’s a good driver. She has a good pair of hands,” evaluated her grandfather.

Chuck’s father was still using draft horses for farming when he was little. “That’s the what, how, and why I got started in 4-H and state fairs,” added Porter.

In his younger years he also worked with Shetland and Welsh ponies. “For the past 40 or so years,” stated Porter, “I’ve stayed with hackney ponies because they are highly animated, high-steppers.”

Through the years, Porter and his equines have won many ribbons and awards. “This year and last, we’ve received the blue ribbons for hackney pony in class,” Porter humbly noted.

Others have taken notice of Chuck’s horsemanship skills. “I’ve been judging for about 40 years across the and ,” said Porter.

Porter has been asked to judge the top premier horse shows of both countries. “I liked judging the pintos at the Astro Hall in ,” mentioned Chuck.

Porter’s evaluated horses at the L.A. Forum and , even in and just to name a few. “In fact, I’ve showed and sold several world champions at ,” added Porter. “Last November, I judged the International Horse Show in ,” said Porter.

Between the 2009 Illinois State Fair and that show, Chuck had to slow down for a bit. “I started having chest pains during the fair. After it was over, I went to the doctor to get checked out. He told me I wasn’t leaving. I had to have a 5-bypass. Now I’m feeling pretty good,” noted Porter.

He must be. He just had the very recently-ended state fair winner—again. “Right now, I’m enjoying breaking a young filly (Marabel’s Dream Girl) for next summer,” quipped Porter.

“I usually like to spend two years getting a pony ready (working, training, and the fundamentals) before bringing into the show ring,” master horseman Chuck Porter stated.

“My father always told me to get the basics down well,” reflected Porter. Good advice that he has heeded for 75 years.
Posted by Becca Sadler at 10:20 PM

Becca Sadler
Welcome! I'm living, crafting, and teaching in the heartland of America with these passions close to my soul.